Earlier in the year, Bad Religion announced that they would be on the 2014 Summer Nationals tour. Needless to say, I was pretty excited about the news. Originally, I had made plans to attend a number of shows. It had been over a year since I had seen the whole gang together and I wanted to make the most of the opportunity. Unfortunately, layoffs were announced at work, so I had to dramatically scale back the trip in case I lost my job. Because of this, I chose to only do a few days in Las Vegas and the show in Phoenix.

I'd been in touch with everyone leading up to the shows and was excited to see what was going on. Brian has taken up cycling and was doing huge stretches every day. Jay was cycling some as well and working as roadie for Stiff Little Fingers. Greg had a lot going on with teaching and his schedule and I was happy to catch up on what had happened since I had visited him at home last year. I had not seen Brooks and was happy to hear all of the new things that he had going on as well. Finally, Ron had a ton of fun things happen in the last few weeks and I was happy to hang with him and hear all of the stories firsthand.

The drive out to Vegas was really enjoyable. The weather was great and I was able to roll with the moon roof open for some of the way. It had been a while since I had done this as it was way too hot in Phoenix and could never go fast enough to get a good breeze going. I got into Vegas with ease and headed over to my hotel. I chose to not stay at the Hard Rock as I knew the hotel was going to be insane as the show was inside it as well. I got checked in and then headed over to the Hard Rock.

I figured that I would get some gambling in while I could. While walking to the slots, I ran into Jay, Brian, and Brooks and joined them for lunch. The food was pretty good and we decided to go out and explore the city a bit. We jumped in the car and hit a few of the local guitar stores. After looking around a while, we headed back over so that they could get set up for the show.

The show in Vegas was great. Stiff Little Fingers were great and Pennywise killed it. The crowd was really into it and it sounded great. Bad Religion took the stage and absolutely crushed it. The sound and lighting was fantastic and the crowd was really into it. The Offspring closed the show out, but I did not stick around to see them. There was a small aftershow party that was occurring in the one of the bars in the hotel, so I headed down to there to close the night out. I had a few drinks with Ron and the gang and decided to call it an early night.

I got up early the next morning to meet Greg for breakfast. He had some school work that came up, so he postponed until dinner. I packed up and checked out of the hotel. I had decided to move over to the Hard Rock for the second night and it was much calmer without the show going. I packed my stuff and got settled in. The day was spent just hanging around Vegas and taking in some of the non strip activities. I found a few cool video game stores, did some record shopping, gave Jay and Andy a few rides, and did a little gambling while I could. Dinner time came, so I headed over to Greg's hotel to get some food. We got some really great sushi and I was able to try Japanese Rockfish for the first time. The food was delicious. The next day was going to be a long one for us both, so we decided to get a few beers, catch up on both of our families and life, and then called it a night. I headed back to the Hard Rock, hung with Ron while he got some food and then got a couple of drinks with him. He wanted to visit some family in Phoenix, so he decided to jump in the car with me in the morning so he could. I headed to bed around 1AM.

After a few hours of sleep, I was up at 6AM for lobby call. Ron met me up and we headed over to McDonald's for breakfast. We got some food and got driving. The ride into Phoenix was easy and uneventful. We were able to stop and visit with his mom for a bit and then at my house to drop my stuff off. We finished the ride out to Mesa and I dropped him at the hotel. We got there just in time for me to go grab Greg from the airport. He was hungry, so we headed out to Chipotle for lunch and 7-11 Slurpees. We were all fueled up and headed back over to the hotel. The rest of the gang wanted to make a few runs, so we hit up a few more stores before heading back.

The show was great. Stiff Little Fingers and Pennywise were again awesome. Noodles came out and joined Pennywise for Bro Hymn. BR took the stage just as the sun was fading behind Mesa Amp. The show went off great and sounded phenomenal. I know that I've said that all before, but they still continue to deliver a hell of a show. I had a few more things to do for the night, so I skipped out on the Offspring again.

After the show, Greg and I made a run to the store to grab some snacks and beer. I enjoyed a couple of beers while the Offspring wrapped up and the crew emptied the gear from the venue. After a couple of hours of cleanup, I said my good byes and headed back to the west side to grab some sleep.

As always, thanks go out to my friends for being great people and hanging with me.

Bad Religion in Vegas from the stage. 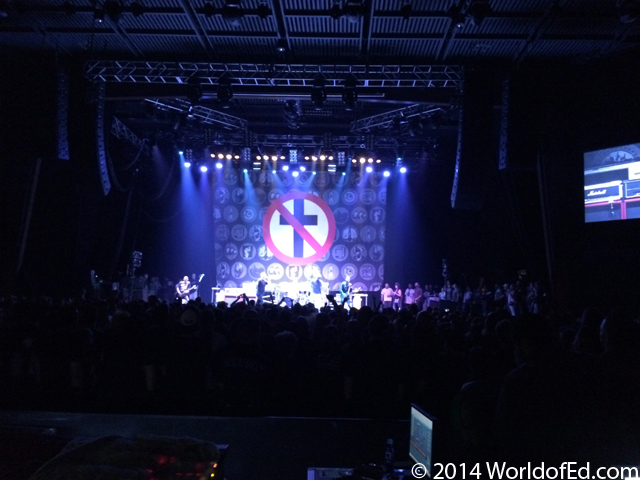 Bad Religion in Vegas from the crowd. 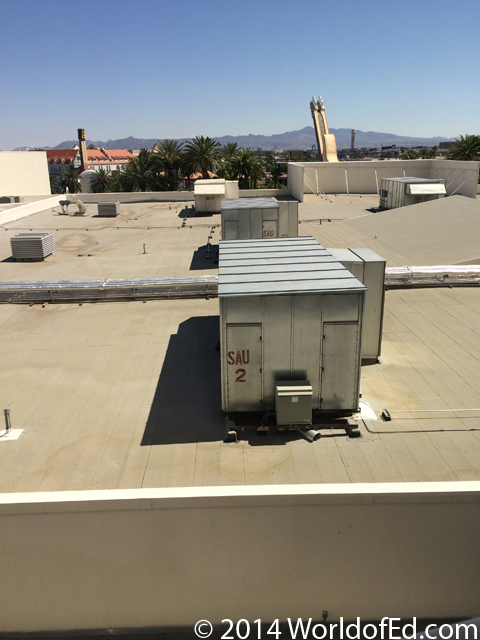 This basically sums up Vegas. 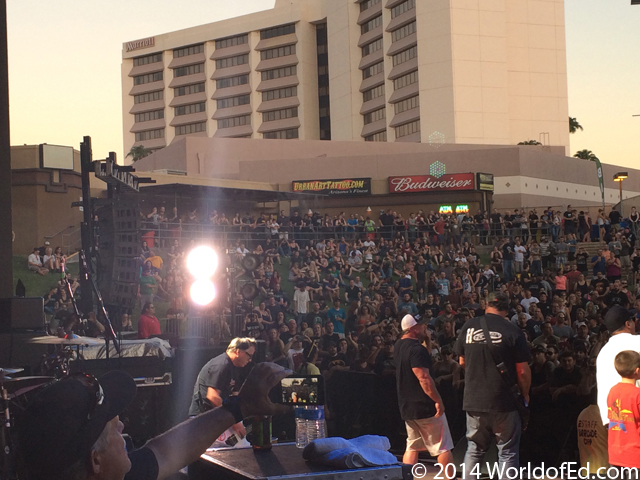 Noodles and Pennywise in Phoenix. 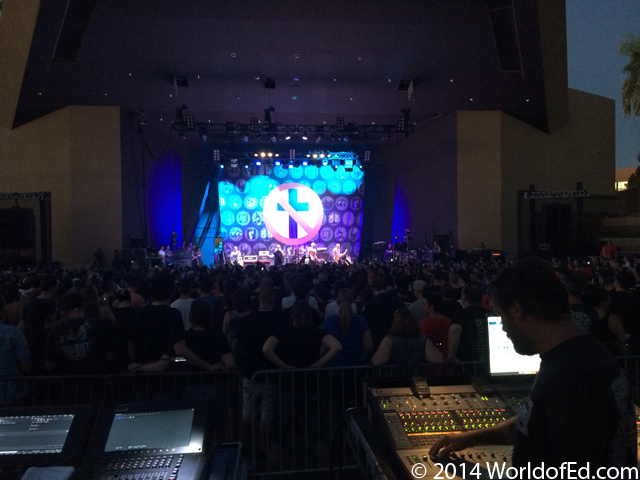 Bad Religion from the crowd in Phoenix. 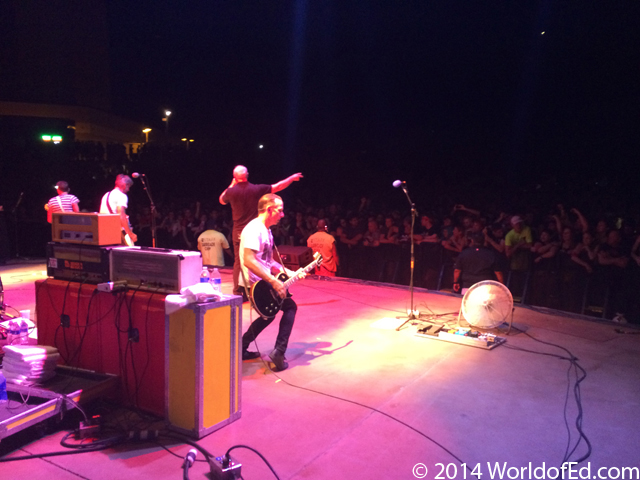 Bad Religion from the stage in Phoenix. 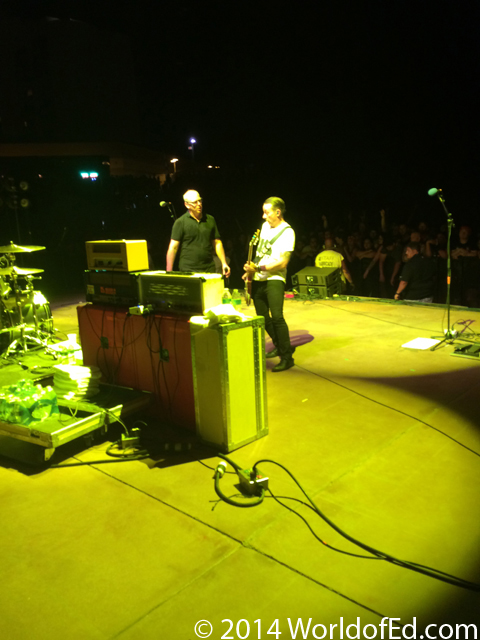 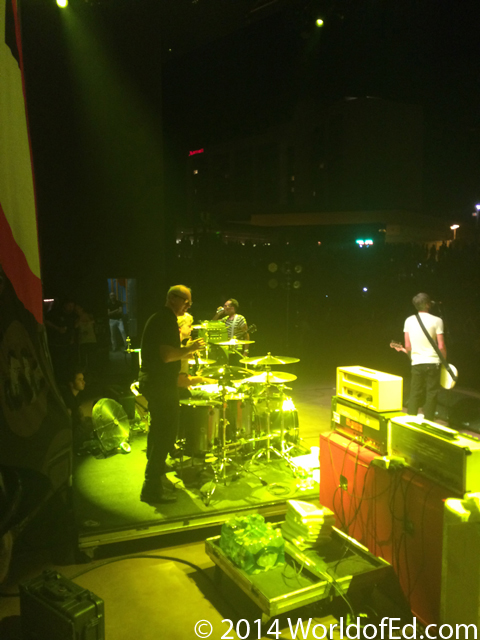