After almost another 2 year hiatus from being back on the right coast, I decided to make the trek back and visit everything that I missed. It was a hell of a trip.

I departed on August 16th, flying with a layover in Chicago. The trip started off very poorly. Our plane engine broke before we ever left Phoenix and took hours to fix. We also experienced delays in Chicago and had an unruly drug dealing passenger on the plane, so I got back home 3 hours after when I should have. Luckily, my good friend Stanton was up, had a bottle of Makers, and was looking to hang. After a shitty day of traveling, I headed to his house, had a few drinks, and headed back to the hotel around 2am, exhausted but more optimistic.

Sunday the 17th and Monday the 18th was mostly spent visiting with family. I hit a few of the cities that I lived in, did the family thing, and did a little record shopping while I was out. I also hit Seaside Heights, an old favorite of mine. I spent a few hours playing the games, winning some prizes, and creating new memories. I was moving hotels each night, heading from Jersey City down to Neptune, and then to East Brunswick.

Tuesday was spent with friends. I was able to visit the Nemeths for a while, get some Nicolo's pizza, and work on the Keller's computer. We regrouped for a Keller family dinner in Eatontown, all catching up and enjoying that we were once again together. After the dinner, I finally got a tour of Joe's house before heading out to get a couple of beers with him. I wish that he and I had more opportunities like that. He loaded me up with some good music and I dropped me off at the hotel.

Wednesday was my Gettysburg day. I missed going there as a kid and wanted to experience it all as an adult. I got up early and made the drive out. It was an easy drive and very relaxing. I dropped my stuff at the hotel and headed to the battlefield. What started as a quick look around turned into a 10 mile hike. I was exhausted and overheated, so I headed back to the hotel for a while. I rested up and because I was so close, drove south past the Mason-Dixon line and into Maryland. I took the long way back through Gettysburg and took in the city at night before calling it quits.

Thursday I woke up and headed back to the battlefield. It started pouring, so I toured the Jennie Wade house and then made my way to Lancaster to visit my friend Rohit. I got there early, got situated, did some shopping, and then met him up. We had a few drinks before his wife and friends joined us. I found out the hard way that I am allergic to frog legs. Due to this, the last hour was me basically drinking water and trying to get my body to calm down. After a very fun night, I headed back to the hotel to get some sleep.

Friday was a big driving day. I got up early and headed to the PA Entenmann's outlet store to look for banana cake. They had none. I then made the drive to Philadelphia where I took in Independence Hall and the Liberty Bell. I'd seen both as a kid and wanted to see them again as an adult. From there, I drove to Seaside Heights again, playing a few more games while I could. I then drove to Somerset where I met up with my old MC Comics friend Rich. We had a few beers, talked comics and caught up on the last 15 years. I then made a few more trips to the grocery store before calling it a night.

Saturday, I got up relatively early, drove through Newark, got Pechter's supplies, and then headed into the city. I went to the top of the World Trade Center, being up there for the first time since it opened. After 45 minutes of sightseeing, I met my good friend Muzz for a few beers. We reminisced for a while before I sadly had to leave. From there, I ended it all where the trip started, in Jersey City hanging with Stanton. It was a really great way to spend the last night in Jersey.

Sunday was an easy day, visiting the cemetery and then traveling back to Phoenix via Austin.

I saw a lot of people and there are many that I missed. I'm very thankful for the time that I had back. 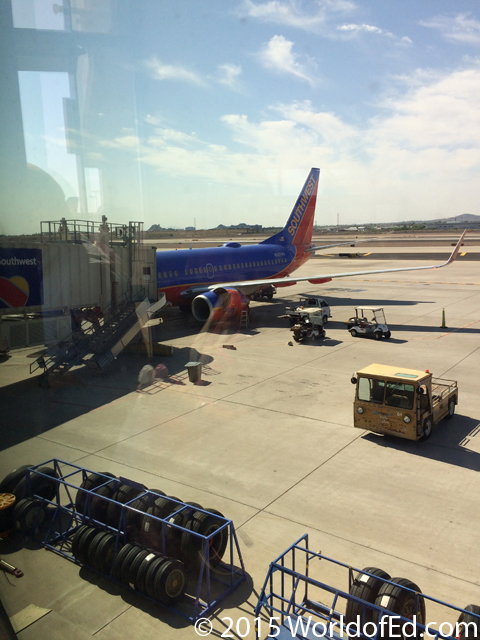 The broken plane that started the journey. 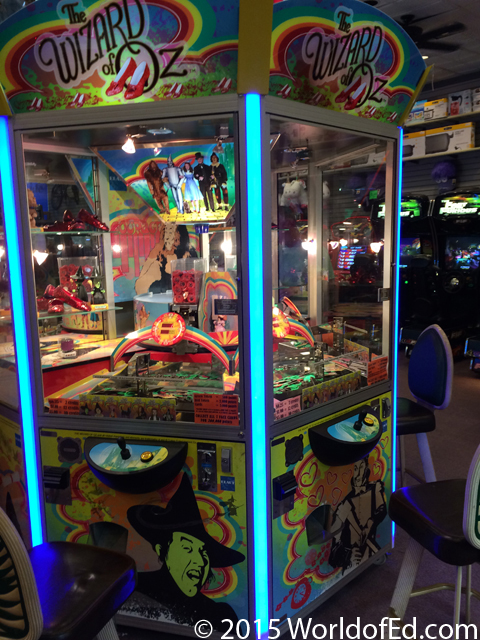 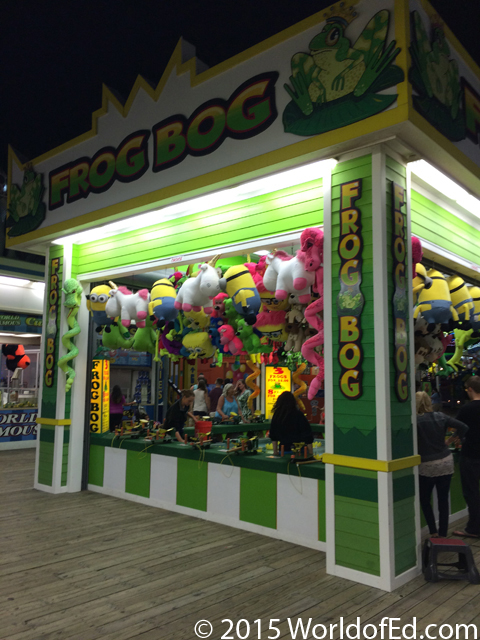 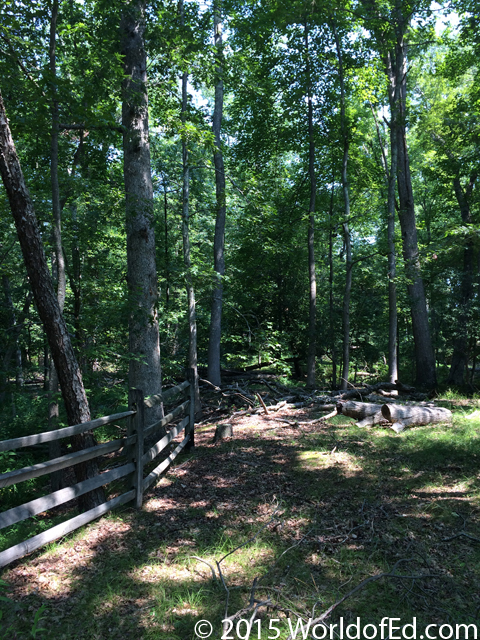 The woods of Allaire State Park. 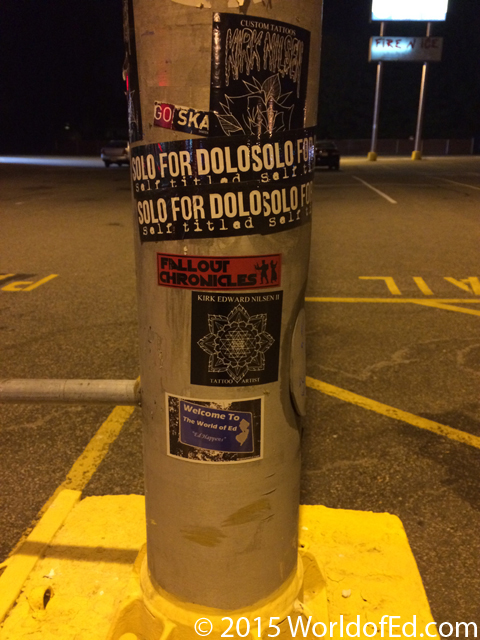 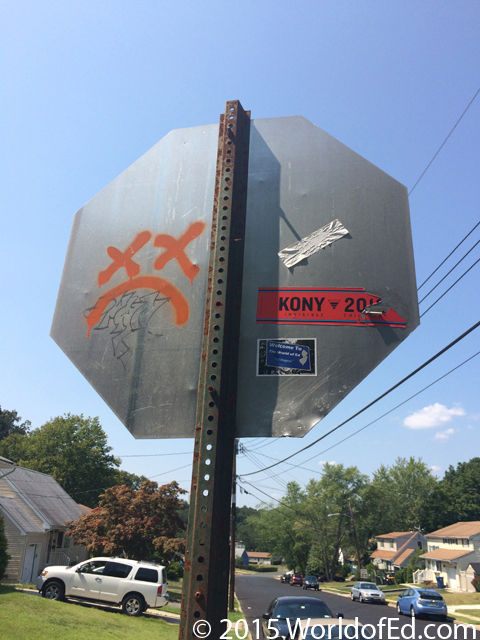 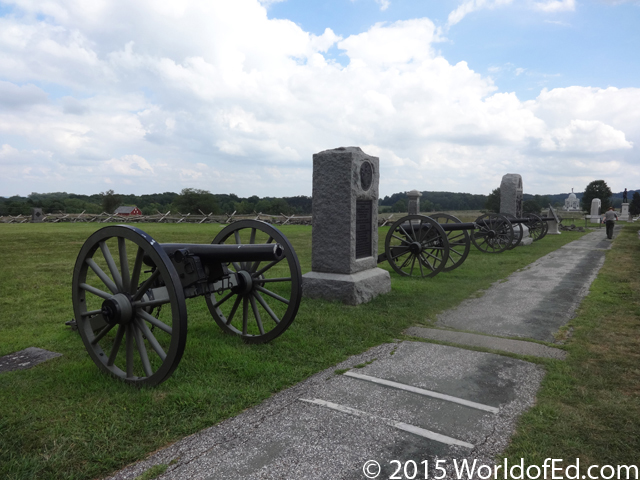 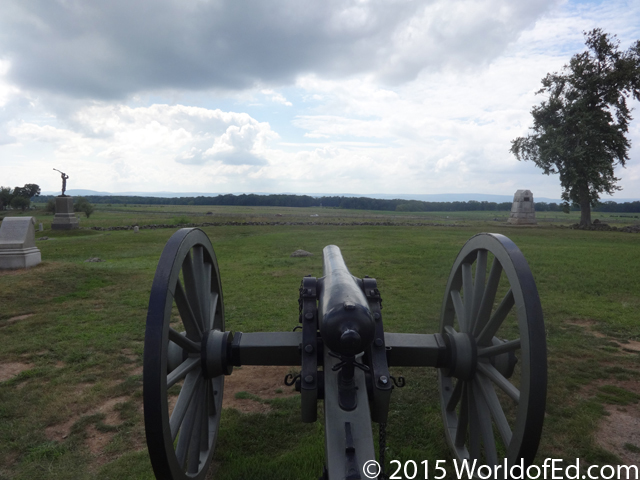 What a member of the Union artillery would have seen. 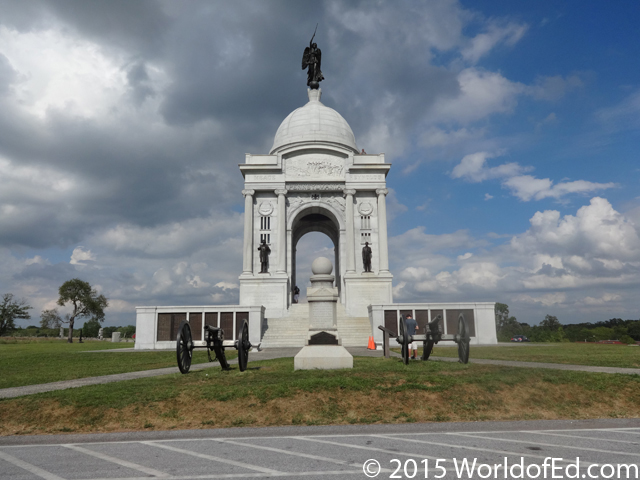 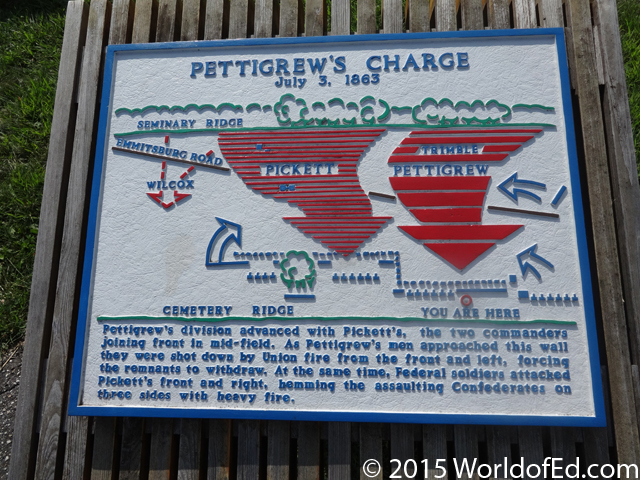 More info on the charge. 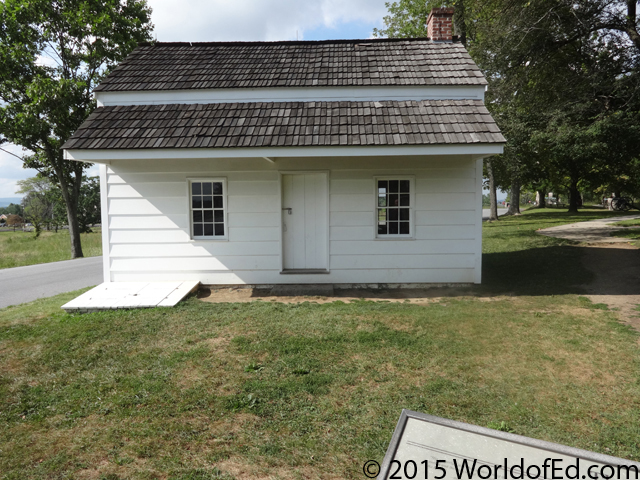 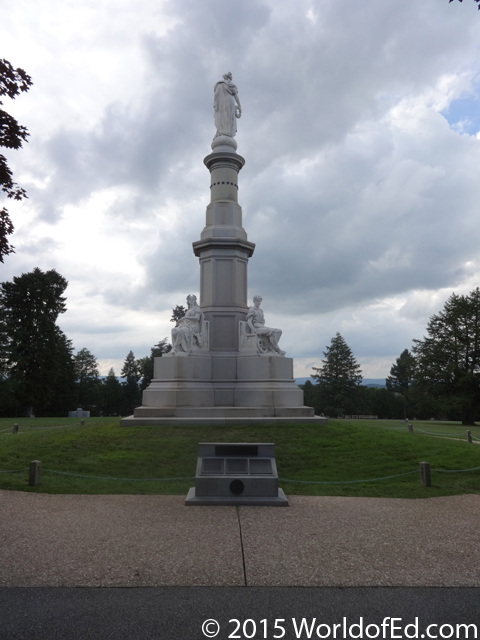 The spot where the Gettysburg address was given. 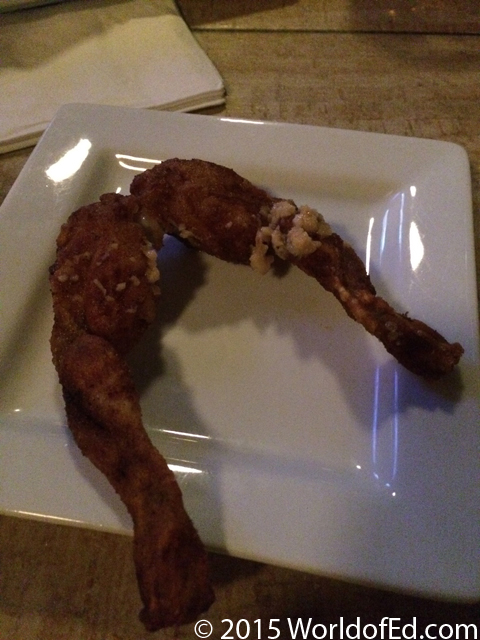 The frog legs that almost killed me. 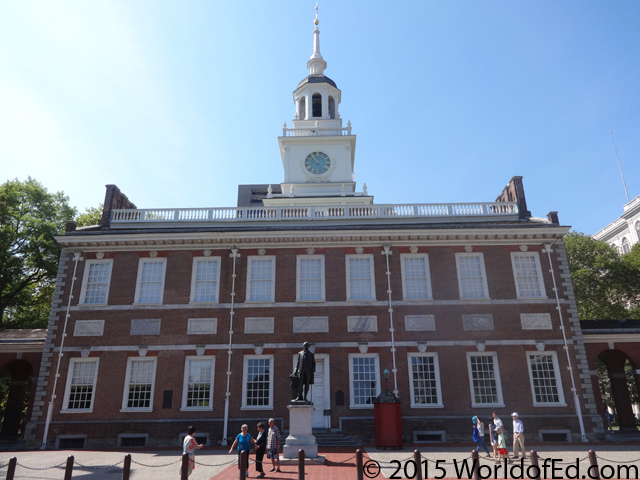 The exterior of Independence Hall. 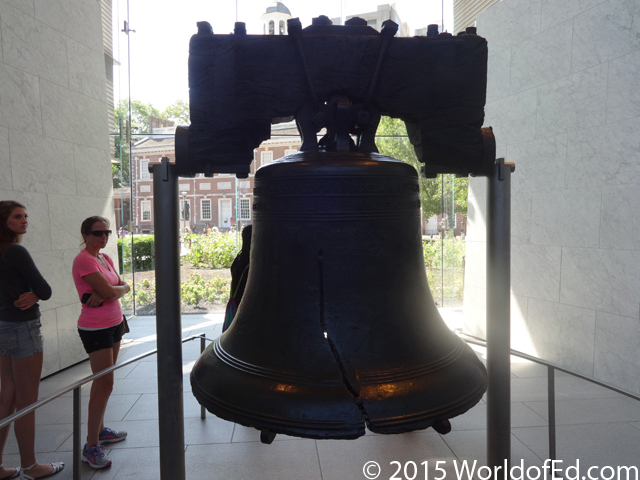 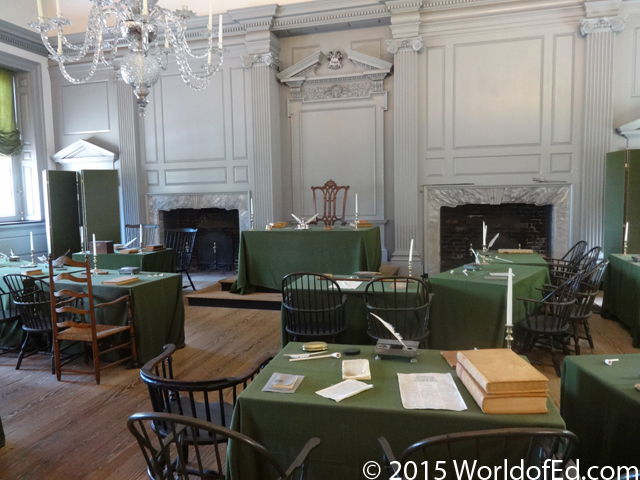 The inside of Independence Hall. 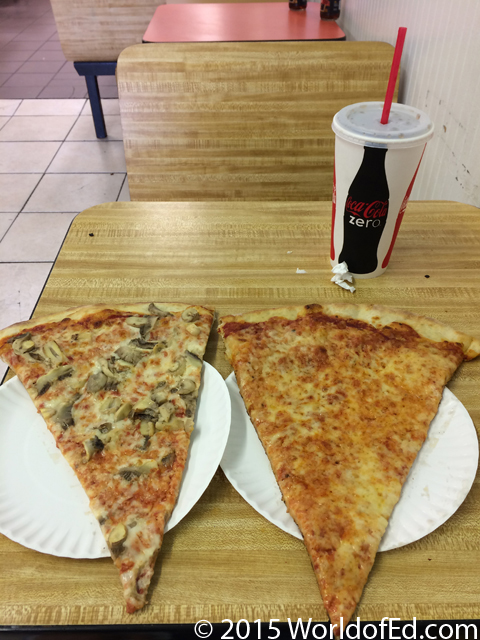 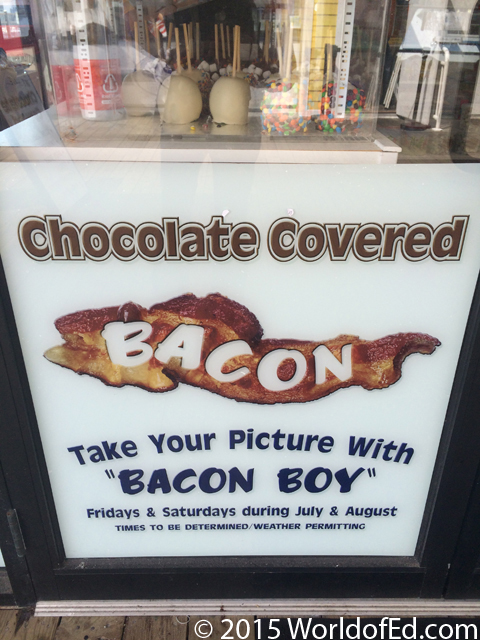 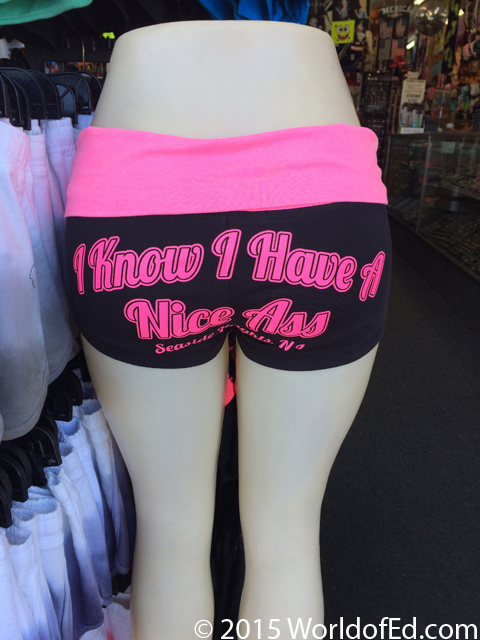 I should have bought a pair. 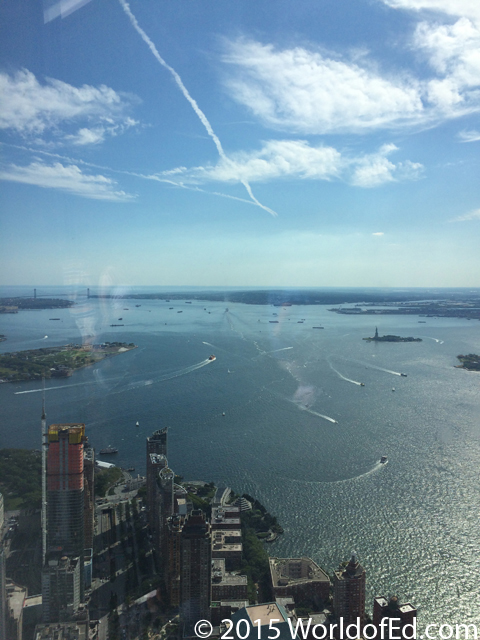 The Statue of Liberty and Ellis Island from the top of One World Trade. 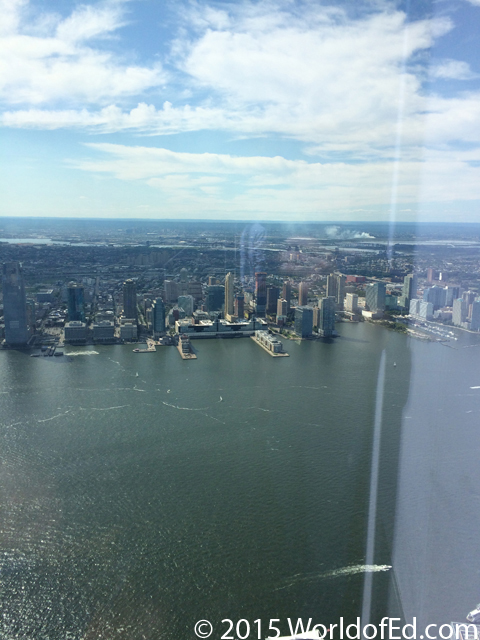 Looking at NJ from the observation deck. 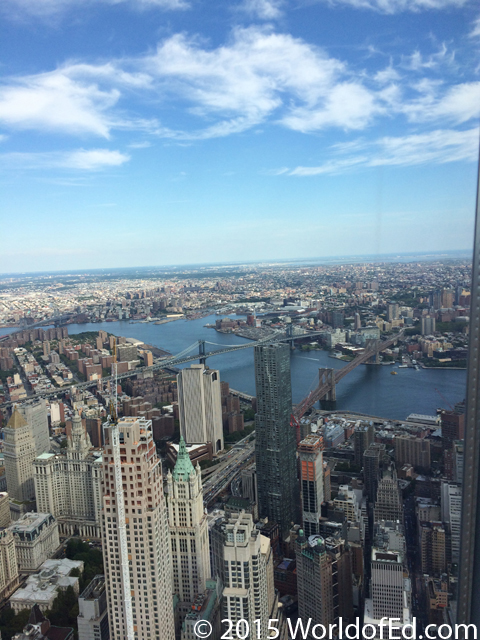 Looking at NY from the observation deck. 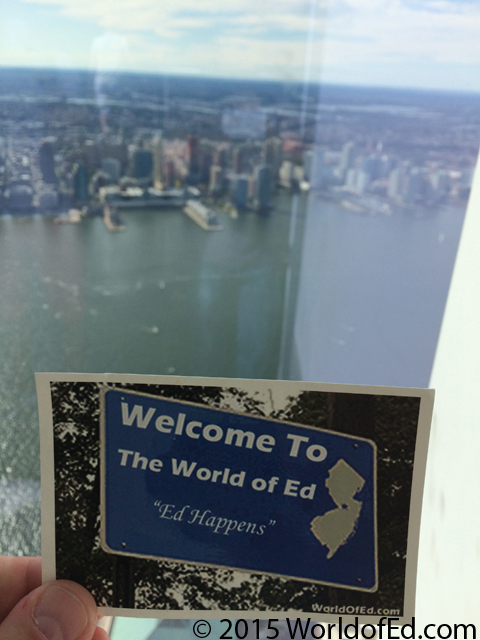 Repping the World of Ed at the observation deck. 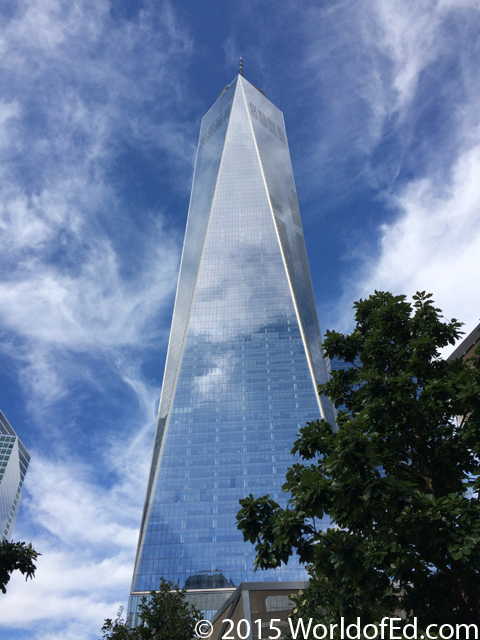