Special Ed Travels All Over The Northeast

The travel that was planner for last year was cancelled due to Covid. This meant that the standard east coast trip was pushed out. I hadn't thought that it would actually occur, but it did and I saw a number of new places this time.

I got up early on August 21, counting on freeway closures. There were none and the drive to the airport was easy. I got everything checked in, took the straight shot to Pittsburgh, and grabbed the rental. First up was meeting up with Kris. I had not seen him in years and hanging out was the point of the trip. He told me to meet him at the bar that he owns, Whisper Nest, and gave me the address. Apple Maps took me to the wrong place. I had to specify the city, turn around, and then get back moving. Once I got there, the bar was cool. He's done a lot to get it renovated, create a cool atmosphere, and very clean. We headed out, got some food, and then headed back there after picking up supplies. I closed the night out, leaving around 2 and getting to sleep around 3. It was a long day and I was beat.

I woke up fairly early on the 22nd and pulled myself together. I wasn't feeling great, but got moving and met Kris up for lunch. We got some food, but I wasn't much in the mood for eating. Kris gave me a tour of the city including a stop at the Duquesne Incline and his new digs. I went solo for a bit, hit up a mall, did some shopping, and then met up with Kris again. We grabbed dinner at Condado Tacos. The food was amazing. We then headed over to Whisper Nest to hang for a little longer. It was a slower night, so we got to hang, do some marketing for the place, hang stage lights and program them, and take in some good music. I had a long drive ahead of me, so I left around 11, vowing to see Kris in sooner than 8 years.

The 23rd was a big drive day. I was up a little earlier than anticipated and hit the Duquesne Incline again to take a ride. I bid farewell to Pittsburgh and started the drive to Ithaca. The previous routing had said it was a 7 hour drive. When I reviewed it, it was showing significantly less time. I made a few pit stops along the way, got a nice lunch, did some shopping, and enjoyed all of the scenery. I got into Ithaca around 6:30, got parked at the house, and was able to hang out with my friends Greg, Allison, and Stanley. We had a nice dinner together, hung out and caught up, talked stocks, played Legos, and watched a little TV. It was very relaxing. It was a later night and I headed off to bed around 11:30.

The 24th was one of the most relaxing days that I have had in a long time. I got up and got breakfast with the family. Greg and I took the day to explore Ithaca and the surrounding areas. I was able to check out the various falls, get geographic explanations of why the areas is the way that it is, and grab some great food. We tried a recommended restaurant for lunch and I was able to have one of the best burgers that I have ever had. The pretzels and beer cheese were also on point. Dinner was a nice meal of grilled corn and brats which were consumed on the back patio, overlooking some beautiful woods. The night closed out with an ice cream run, more catching up, and a little tv. It was a fantastic day.

I got up on the 25th and was fully relaxed. I slept incredibly well and was ready to go. I got breakfast, discussed cryptocurency, and got on the road around 10. I headed out to the Poconos for a well deserved hang. I met up with Chris from MC Comics for the first time in 21 years. He and MC were formative in who I have become and I am very thankful that I was able to spend some time with him. We were only able to hang for 2.5 hours, but it was a great time. I finished out the ride to Jersey, got parked in Newark, and caught the train into the city. Time was limited but I was able to grab some slices, see One World Trade, hit Times Square, and get gifts for my nieces. It had been a lot of traveling so I headed back tot he hotel, settled in and cleaned up, and got wound down.

I had a lot to do, so I was up early on the 26th. I visited the cemetery to visit my brother, cruised around Kearney, tried to buy babka at Pechters, hit up a comic book store, and headed south for the day. This was one of the shortest times spent in North Jersey. I needed food so I met up with my Uncle Tom, got lunch on Rt.18. It was great to hang with him and catch up on things. After a few hours, I broke off to get my stuff into the hotel. I unloaded everything, took a bit of downtime to get sorted, and then got out. I saw all of the normal sites, grabbed some Nicolo's, grabbed a couple of beers, and caught up on email and such at the hotel. I was looking to relax a bit and called it an early and easy night.

I had traveling to do and got on the road early on the 27th. I headed south, got some shopping in, caught all of the standard sites including Allaire, stopped in Asbury to visit my uncle's memorial bench, and then got over to the hotel. The hotel that I was staying at is the normal one and I had 2 nights in it, so I was able to easily post up and get settled. I did so, and then headed to the beach. The first stop was in Asbury but it did not pan out. The second was at Seaside Heights. I got 2 slices from 3 Brothers, walked the boardwalk, played some games, mailed some postcards, and enjoyed a weekend nice out. I tapped out early, grabbed a couple of beers, and called it a night.

The 28th marked a week on the east coast and was the most low key day yet. I got a great amount of sleep and was very rested. I got things cleaned up at the hotel, set a plan, and then headed out to do a little shopping. I hit the area up before meeting my friend Brian for some Greek food. I'd not seen him since late 2019 so it was great to be able to visit, catch up, and grab some great food. With the meal over, I grabbed some groceries and headed back to the hotel for a bit. I did a little work on the computer and then headed over to Joe's. The last time that we saw each other, we were both in our 30's. I got dinner with his whole family, played with the kids, caught up on everything, and made some memories. The kids had to get wound down for bed so I headed back to the hotel, drank a few beers, and got everything packed to leave in the morning.

Things changed for the 29th. The original plan was to drive to Philadelphia and hang with a few people. That ended up changing and I had more time in Jersey. I was able to head to my brother's grave again and drop off what I had won at Seaside. I headed south to Old Bridge to buy some bagels. While there, I ran into someone that I had gone to grade school with. It had been a long ass time and was unexpected for sure. I then continued heading south and doing some shopping along the way. The revised plan put me in Asbury park where I hung out with Christine for a long while. She's another grade school classmate that I had not seen since then. The time was fantastic, drinks were awesome, and view was amazing. I still had the Philly hotel that I couldn't get out of, so I hopped on the road around 8, made the drive, and got everything squared away for the night.

The 30th was a travel day, so I was not able to accomplish much. I got up and ate breakfast, got the car loaded up, and started driving. I had about 2.5 hours until the rental was due and plotted a course south. I made a few stops, including checking out Four Seasons Total Landscaping. I continued south to the historic buildings. I had a whopping 48 minutes in Philadelphia proper. I had enough time to get a few postcards out, get pressed pennies for my nieces, and quickly check out a few of the sights. I still had things to do, so I had to get moving. I got the car gassed up and returned, got to Philadelphia International, and started the first of 2 flights for the day. It was slightly eventful due to someone not wanting to wear a mask. That was remediated, the flights were completed, and I was back in Arizona. 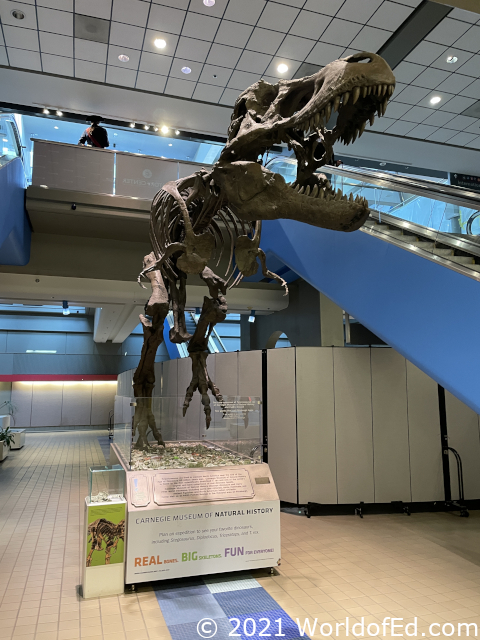 You don't fuck with a parking chair in Pittsburgh. 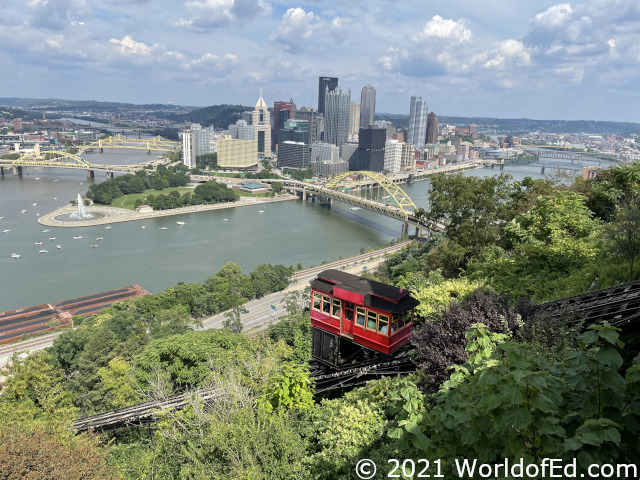 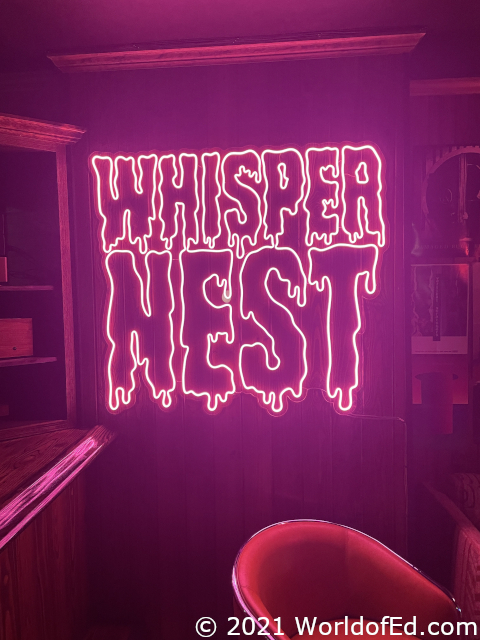 The best bar in Pittsburgh.

Catching up with Kris. 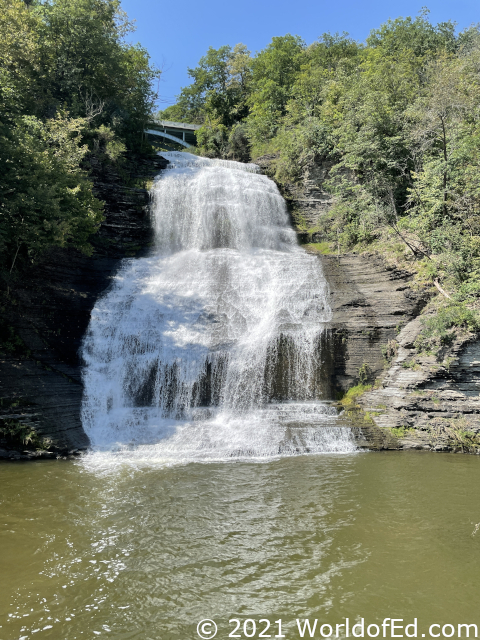 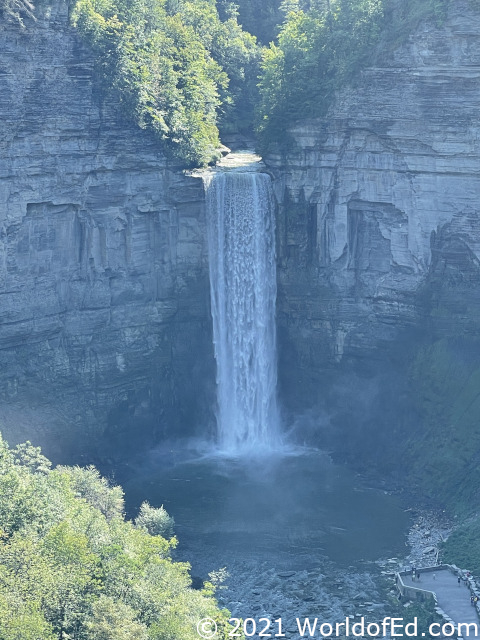 Taughannock falls The picture does not do it justice.

We checked out a newer restaurant in the area for lunch and were pleased. 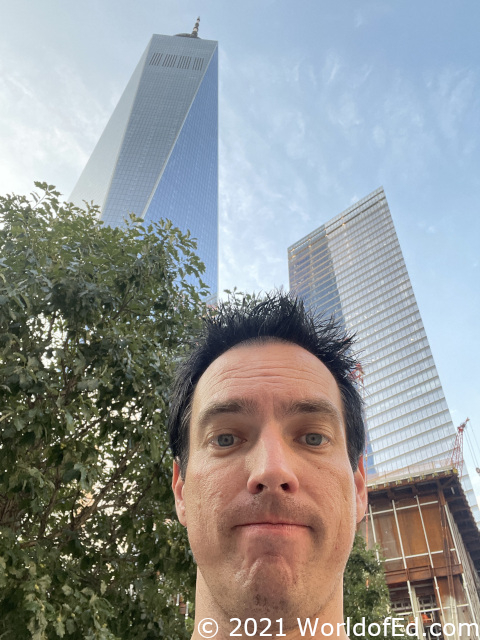 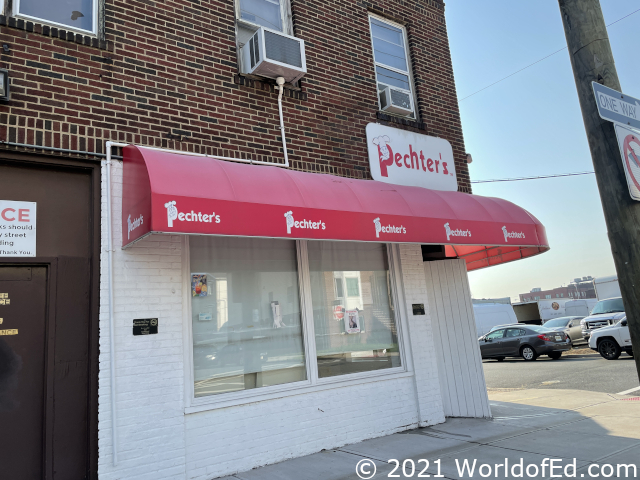 Pechter's retail was closed which was fucking infuriating. 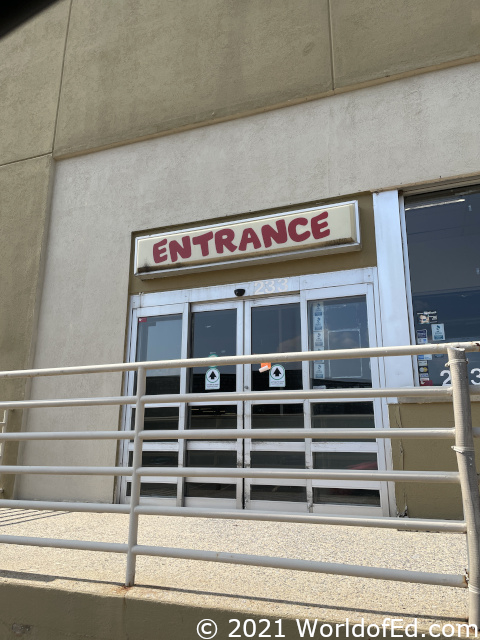 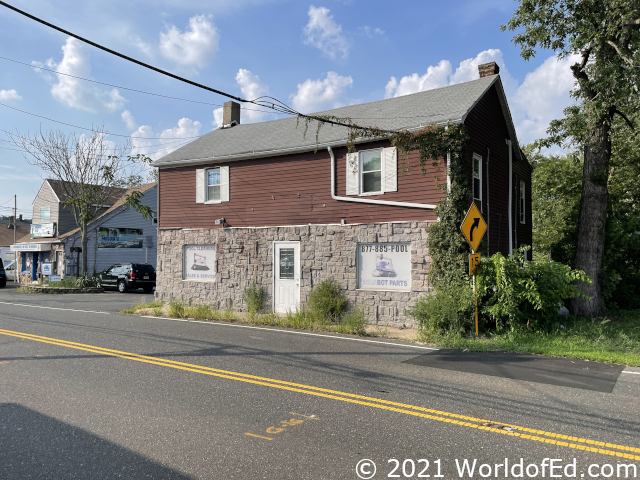 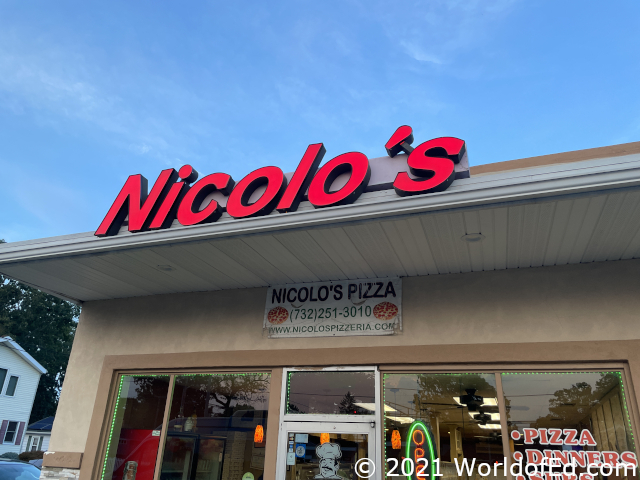 Nicolo's. I'll always stop in for a slice or 3. 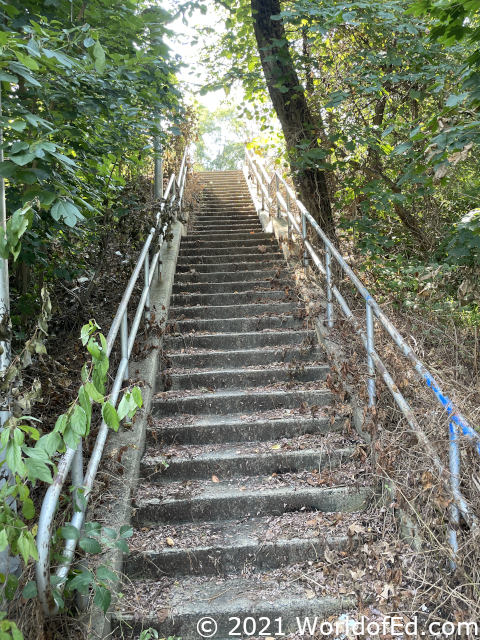 An important staircase to me. 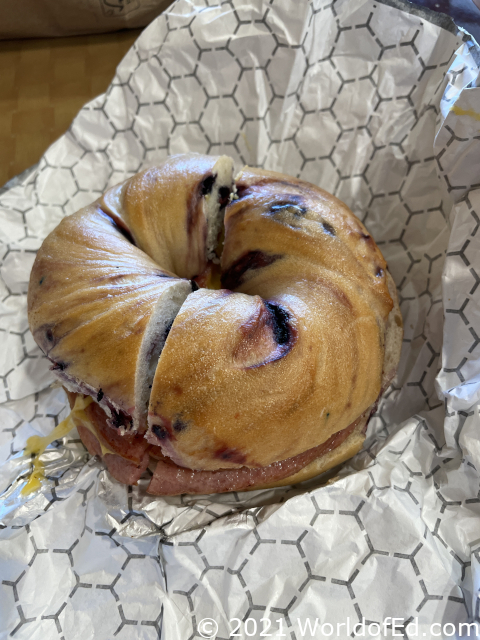 The only Jersey bagel that I got. 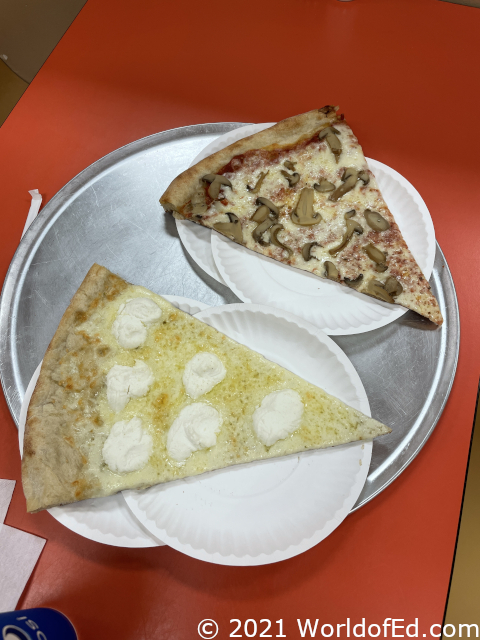 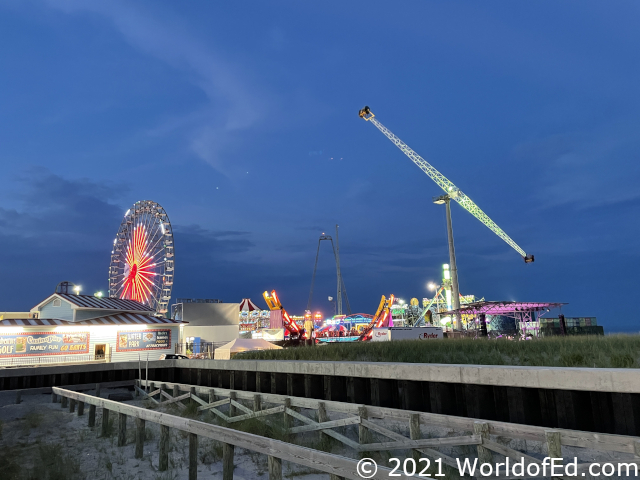 A nice night at the boardwalk. 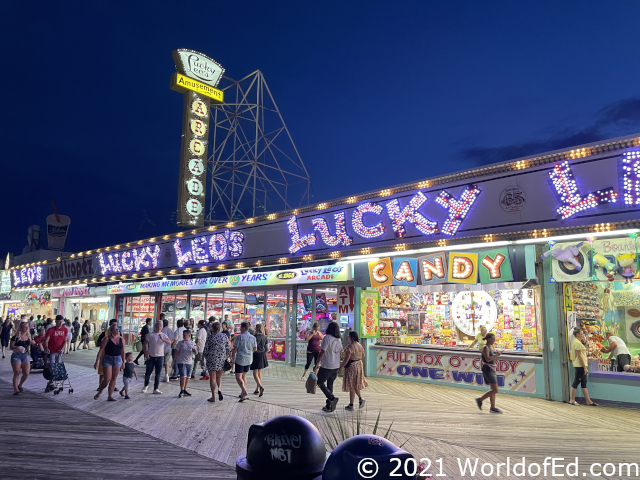 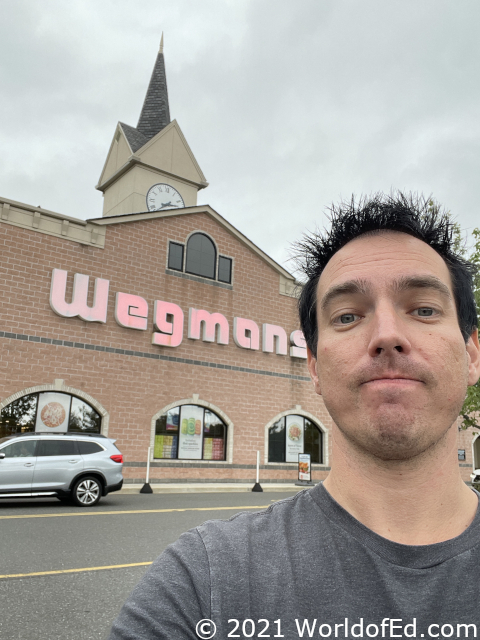 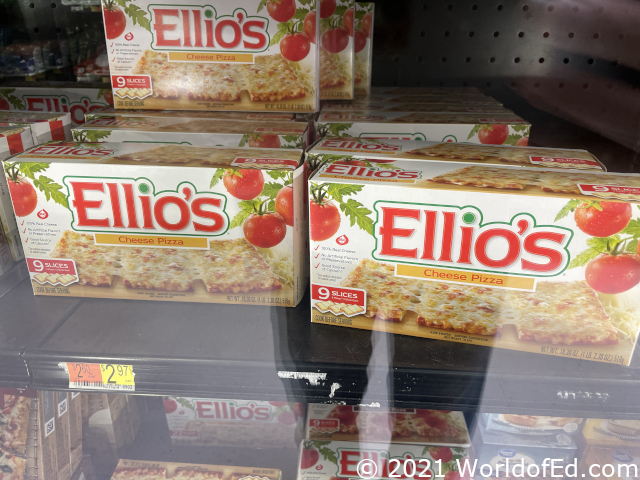 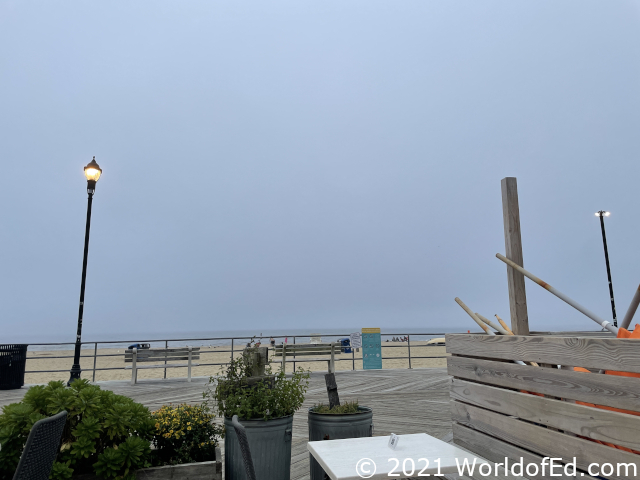 A beuatiful view and amazing company. 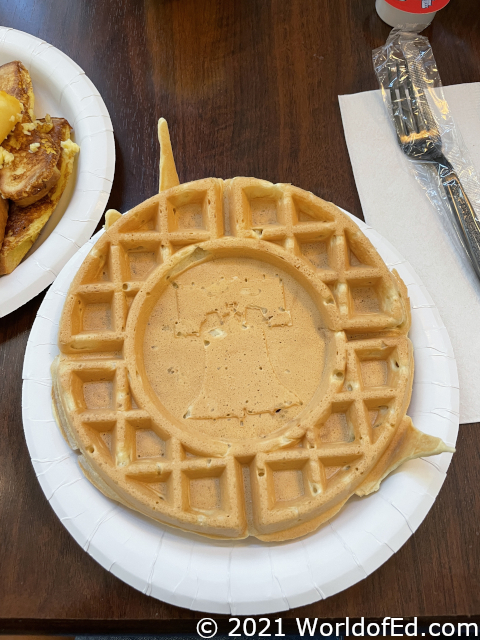 Even the waffles are free here! 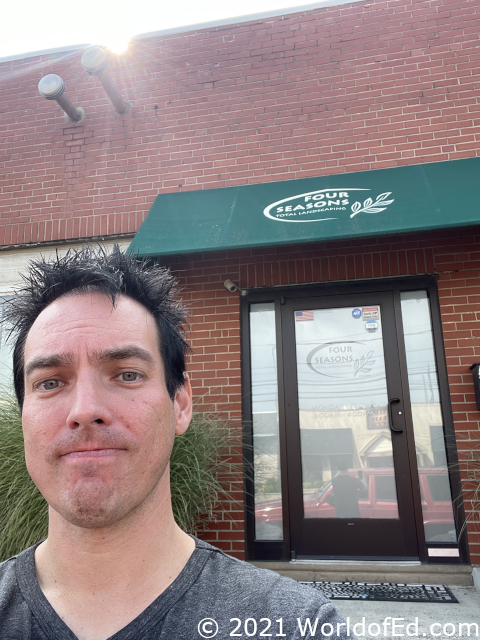 What a beautiful and majestic sight. 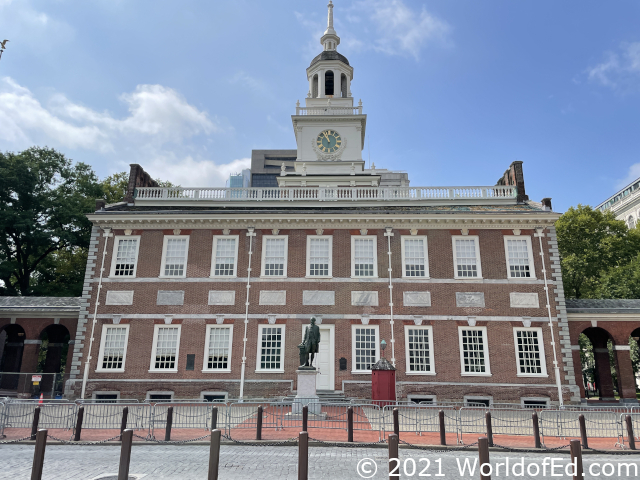 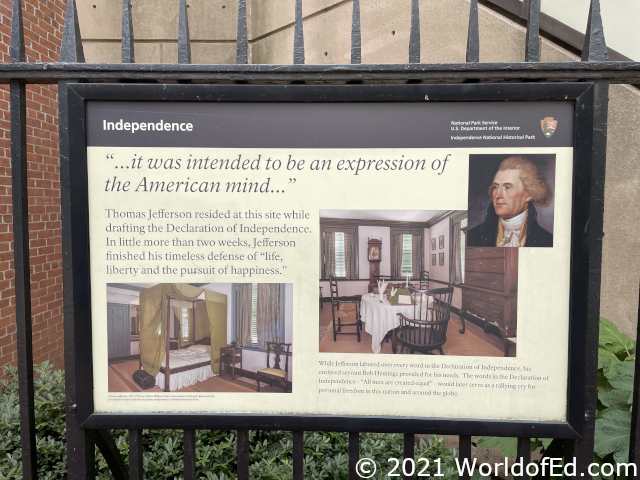